See the timetable at the bus stop to check the destination, route number, and time.

To board the bus, line up single file. Please refrain from smoking or littering.

Have the proper fare ready before you get on the bus. The change machine on the bus only accepts coins and 1,000-yen bills.

2. Getting on the bus

Buses of various routes will stop at the bus stop. On the front and side of the bus, you can see the route number, destination, and stops along the way. Check that you have the correct bus before getting on.

Example of destination on front of bus

Example of destination on side of bus

Get on the bus through the rear door and get off at the front door. Pay your fare in cash when you get off the bus. 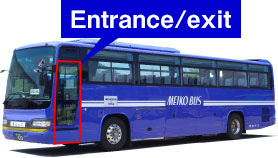 For the Kumano Kodo express bus, get on at the front door.

Be sure to get a numbered ticket when you get on the bus.

Please sit down while the bus is moving. If standing, hold on firmly to a strap or handrail.

4. Getting off the bus

When your stop is announced, push the getting-off button nearest you to inform the driver. The next stop is also shown on the fare table at the front of the bus. 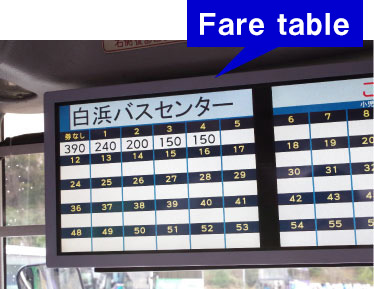 To know your fare, refer to the fare table at the front of the bus. Pay the amount that corresponds to the number on your numbered ticket.

Do not move around while the bus is moving. Wait until the bus comes to a complete stop and the doors open. 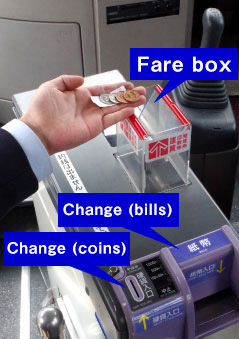 After the bus has come to a complete stop, go to the front of the bus and put your fare and numbered ticket into the fare box.

Inform the bus driver if you want to pay for several people together.

If you have a bus pass or a bus ticket, show it to the driver.

Note that Meiko Bus only accepts cash for fare payment. You cannot use smart transportation cards (such as ICOCA, PiTaPa, or Suica).

6. Precautions getting off the bus

Watch your step getting off the bus. Be sure to take all of your belongings with you. After you get off the bus, look carefully for traffic before you cross the road from behind or in front of the bus.